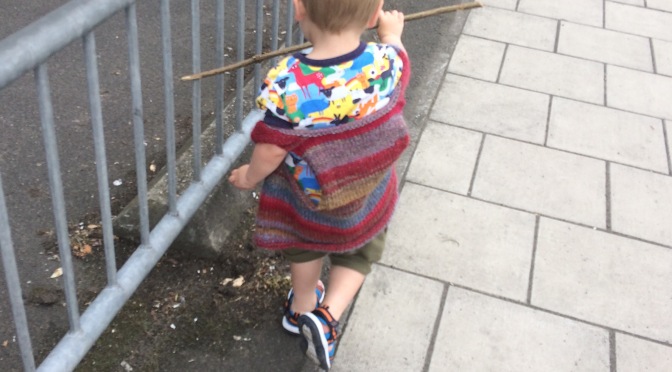 I sat down and made a list, a sort of homage, to my son’s play. He plays with his whole being, and it is astonishing to witness. It is a privilege to see someone grow a psyche from scratch. Play is a soul-making activity. In his essay, ‘Creativity and the search for the self,’ Winnicott conceptualises play as the ‘an expression of I AM, I am alive, I am myself. From this position, everything is creative.’ I love how seriously Winnicott takes play, how he sees it as the basis for a meaningful existence. It is a deep, soulful act ‘involving the whole personality,’ he famously says in the same essay. This is the state of intense aliveness where even breathing, or rolling out pastry seems like a sacred act of being. Where everything is surprising. And it feels like you’re discovering the world for the first time.When R. is absorbed in these activities, I sort of wander along behind him narrating what is happening, in a state of trustful curiosity. I think this might be called ‘mirroring.’ Mums and therapists do allot of this sort of emotional labour for us. It’s like high octane validation for every tiny thing you have ever thought and gestured. It is a very intense form of attention. It is completely electrifying to be on the receiving end of: it makes you feel alive. And like everything you think or do matters and is completely gorgeous. It makes you feel like merely existing, just being yourself, is extraordinary. It’s the same high you get when someone is totally into you and can’t quite get enough of everything you do: that feeling of being a special snowflake. Gorgeous, unique, with something to offer the world. Eventually, if you’re lucky in the parent or therapist roulette, you internalise this affectionate, curious gaze which has been directed at you, and even crossing the street or feeling disappointment seems significant, and you just feel radiant, incandescent. And it makes it possible to pay attention to your own life in a particularly intense, creative sort of way because when you’re in this frame of mind, every little thing you do is magic. Virgina Axline’s moving account of working with a child called Dibs in her play therapy practice is a testament to how powerful it can be to be seen when we are at play. What is at stake when we play is no less than selfhood.

I think my therapist does pretty much the same thing for me, following behind me, nattering the equivalent of, ‘ah, you picked up a stick. I see,’ while I’m on the couch as I free associate and talk about what is on my mind. Whatever takes my interest in the external environment (such as pastries, the works of Winnicott, Thamesmead, desire lines, a pocket of grief I felt last week, the décor of his consulting room…) is followed, taken in, reflected back to me, validated, and then I get to make meaning from. This took a long time for me to learn how to do. I have spent allot of time lying on the psychoanalytic couch in paralysed silence, wondering what he wanted me to say. The scars of neglect and over invasive, controlling, critical parenting run deep and make almost impossible to be spontaneous, to pick up a stick and feel like that was a significant gesture. It is a long road back to one’s soul, the ability to be fully alive and present to oneself in an ordinary way. I learned at a very young age, maybe an infant, definitely by toddlerhood, to be compliant, a good girl who did what she was told: even my imagination was colonised and I found it difficult to know what I thought or felt. Many of us have learned to be organised by the presence of another, to wait and see what they want from us rather than feeling free to potter around the shores of our psyches, picking up what we find and examining it and trusting that the other (be it friend or partner or therapist or ourselves) will be quietly attentive and interested in whatever truths and pebbles and treasures we find there. To do this for another human is a pleasure and privilege.

Below is the list of astonishing acts of play I witness on a daily basis, as I follow behind my son, wittering, ‘ah, I see you have picked up a stick.’

Sitting on the train floor

Asking to stand in front of the yellow line on the train platform, not behind it (*obviously I said no)

Stroking cat faces in the cat aisle at Sainsbury’s

Peering at strangers from behind a seat

Asking for ice cream when he knows I’ll say no

Dropping groceries deliberately out of the trolley whilst shopping

Making wet tracks with his bicycle tyres through puddles

Walking, not riding his little cycle. Generally using his cycle for anything but actually riding it.

Making the wheels go round on EVERYTHING

Turning switches on and off

Kicking and banging on the table (*obviously I put a limit on this.)

Riding on/plugging in/ the hoover

Belly flopping in the bath

Running up and down hills

Posting leaves and twigs down gutters and drains

Listening to water in said drains

Dropping pebbles in puddles and streams

Zipping and unzipping a coat

Pretending to be a human harmonica

Holding two pieces of pizza at once, one slice in each fist

Holding onto the handrail of escalators

Walking up and down staircases

Smearing. Ketchup, jam, yogurt on the table (*obviously I put a limit on this, outrageous fun though it is.)

Checking for cracked eggs in the supermarket

Luring the cats with foodstuffs and varying degrees of success

Climbing on my back when I’m doing yoga

Tearing books (*obviously I put a limit on this. He’ll have to wait till art school before he shreds books.)

Paying with a contactless debit card

Sitting in someone else’s chair

Thinking through how to climb a chair or pull himself up, onto the sofa

Pulling all the books out of the bookshelf

Drawing on walls and tables (*obviously I put a limit on this behaviour. Another one for art school. ‘Walls aren’t for drawing on, unless you win the Turner Prize’)

Eating mark making objects such as markers and paintbrushes

I am deeply indebted to the following thinkers on the subject of play:

Virginia Axline, Dibs: in search of self

Janet Lansbury has fleshed out much of this theory in her online articles and podcasts in an accessible and practical advice for respectful parenting: http://www.janetlansbury.com

One thought on “I see, you picked up a stick: play as soul- making ”

Reveries of a mum on the psychoanalytic couch